A ringing year in lockdown – A Chesham Bois garden (2020) 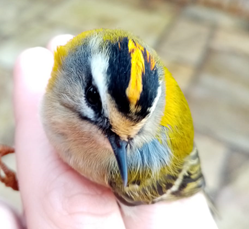 The year 2020 is unlikely to be remembered with fondness by many. The global pandemic brought misery and unimaginable restrictions to our daily lives. We were all left searching for ways to navigate this terrible period so that we could retain some sense of balance and perspective. I was fortunate. At the outset of the first lockdown, I was able to secure my C Permit and so ringing independently in my garden had become a realistic proposition. Additionally, I now had little else, aside from online meetings and Netflix, to fill my time.

Recognising that a national volunteer force of ringers would be underemployed during the lockdown, the BTO devised a new survey scheme – the ‘Garden CES (Constant Effort Site)’ which seemed like too good an opportunity to miss. 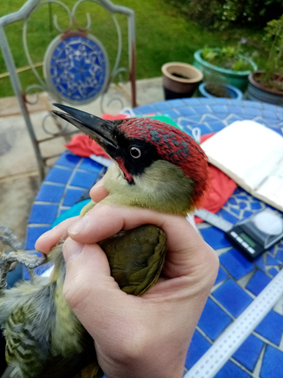 I had always intended to ring birds in my garden, but I had never envisaged that this could be part of a national survey. This Constant Effort survey has had to be adapted for gardens, with a recognition that bird feeding stations can be used and that the usual minimum number of birds to qualify has been removed (ordinarily this stands at 200 for a standard CES). Whether this data will prove to be as useful as the existing CES surveys remains to be seen, but in the absence of many other survey activities in 2020 it was as good as it was going to be in the circumstances. At the time of writing, the BTO is continuing with the garden CES project in 2021, so it could yet become a long term scheme.

My garden in Chesham Bois is well-placed to attract a good variety of species as it is suburban, but backs onto farmland (pasture), with a mixed woodland in close proximity. However, my expectations were exceeded during the course of the year, with ringing records of birds I had never seen in my garden previously, including a Firecrest and two Whitethroats.

My CES was conducted using an 18 metre, 5-shelf ecotone net which was set up along the length of the garden in front of a mixed hedge of native and exotic species. The feeding station supplied sunflower hearts, black sunflower seeds, suet balls, peanuts and dried mealworms – a veritable banquet!

In addition to the unexpected Whitethroat, ringing in my garden provided me with an opportunity to ring a number of new birds I had previously failed to encounter whilst ringing at Wilstone and Marsworth, including Coal Tits, Jackdaws, Starlings, Nuthatches and Woodpigeons.

Whilst the garden CES project was suitably distracting, there was plenty of scope for additional ringing sessions during the course of the year, and I was able to ring on 48 separate occasions between 1st May and 28th December, including a productive session on Christmas Day! 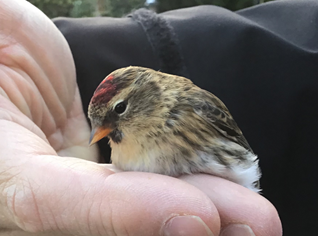 Across the course of 2020, I was able to process 531 birds, of which 401 were ringed for the first time. This represented an average of 11 birds per session. Unsurprisingly, there were no controls or ringing recoveries as yet, but there were 130 re-trap records. Twenty seven species were ringed altogether across the year, including a number which had been missed in the CES: Green Woodpecker, Lesser Redpoll, Siskin, Firecrest, Redwing, Goldcrest and Blackcap. All of these were most probably attracted by tape lures which are prohibited for CES projects. 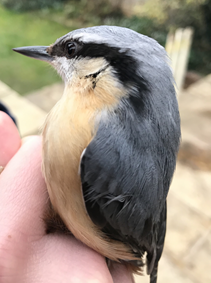 There is no doubt that ringing with others at a reserve is a more enjoyable pursuit – the ability to socialise and share the joy of ringing studies in company was another sad loss for much of 2020. Nevertheless, the experience of garden ringing has been a genuine treat – the ability to watch the net from the comfort of a cosy kitchen is great, and the dash to a net from the patio steps has been very exciting at times – the Green Woodpecker was especially dramatic! It has also added another dimension to watching birds in the garden: ‘Is it ringed?’ is one of the first questions to be called out whenever a new bird is sighted. The fact that so many remain un-ringed does create the impression that there are many more birds visiting our little patch than I had first imagined. My son has named each individual bird that we have caught – I fear that we may run out of names by the end of 2021.
Posted by Lynne's Birding on May 16, 2021 1 comment: