This is the third year of ringing as a C Permit holder in my garden in Bedfordshire. The 258 birds I caught were from 33 ringing sessions. An average of just under 8 birds per session. Normally I would put just the one 40 foot net up, but on 5 occasions, I put a 40 foot and a 30 foot net up in an L shape, with the feeding station inside the base of the L. The best day of the year was on 17/11/19 when I caught 33 birds in 6 hours from 2 nets. On that day the numbers were helped by 16 Long Tailed Tits. There were 4 disappointing occasions when I only caught just the one bird.  All 4 of those days were in March and April.
I am fortunate with the location of my garden, in that it is on the edge of the village with mixed woodland (mainly deciduous but with some conifers) on one side, and a field with livestock at the rear of the garden. It gives me the possibility of attracting garden, woodland and farmland species. I also have a natural mixed hedge at the end of the garden comprising of Hawthorn, Blackthorn, Hazel and Field Maple. The birds particularly use this hedge as cover in the winter.
I have now caught 26 species in the 3 years I’ve been ringing at home. In 2019 I added one new species which was the Nuthatch. It was particularly satisfying as in 20 years of living in Caddington, I had never seen one in my garden, so it was a complete surprise. It was made even more interesting in that I caught a pair, so it was nice to compare the under-tail coverts of the male and female. The colouring of the coverts in the male are a much stronger chestnut brown. The only other species I’ve caught that is not listed above were 2 Sparrowhawks which I caught in 2017. 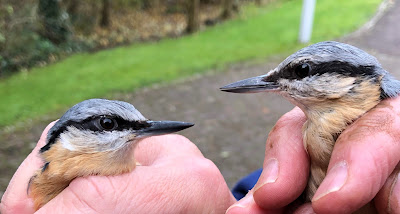 The beauty of putting a net up at home, is that you can attend to other domestic duties in between periodic checking of the net. In my garden I can see the whole length of the net without leaving the house. It has the advantage of not disturbing the visiting birds while on a net round.
The easiest time to catch birds seems to be in June and July. At that time of year almost every bird caught is a 3J. The young birds haven’t learnt how to avoid the mist nests and often blunder headlong into the net. For some reason Starlings only seem to visit my garden in the breeding season. I normally feed the fat squares all year round which the Starlings seem to love in the spring.  I made the mistake of running out of supplies in June. At that point the Starlings stopped visiting, and consequently I only caught 5 this year. In some ways that was a blessing, as apart from being difficult to extract, they are the noisiest and naturally incontinent of birds when trapped in a mist net!
I’ve still got a few target species that regularly visit the garden that so far have avoided being caught. Carrion Crow, Jackdaw and Green Woodpecker are the three species I see most often. The first two I’ve had in the net, but by the time I’ve sprinted outside, they have managed to escape my clutches! Unfortunately I’ve had a pheasant in the 30 foot net at least a couple of times. Each time they’ve managed to leave behind some gaping holes in my mist net. One bird that I dread catching is a Ring Necked Parakeet. They have flown over my garden a couple of times in 2019. So far they’ve not discovered my food supply.
I have two feeding stations near both ends of the 40 foot net. I feed the birds all year round with peanuts, sunflower hearts, fat balls, fat squares and Niger seed. As I put up the net so regularly, the resident birds have learnt how to avoid being caught. I often see Blue Tits hovering in front of the net, or see a Long Tailed Tit perched on the top string. When I don’t have a net up, I have dozens of Crows and Magpies. As soon as there is a net up, I rarely see a corvid in the garden! They clearly are very intelligent birds. One of the birds who hasn’t quite managed the art of not being caught is a male Robin, which I have re-trapped on 15 occasions. I first caught S872385 on 23/8/17 and last re-trapped it on 7/4/19.
At some point, I intend to construct a drop trap. I wouldn’t use it at the same time as I use the mist nets, but I could have it set, when it is drizzly or windy. I would use a string to an upstairs window, with the intention of catching more corvids which are daily frequent visitors to the garden. I have tried at times to use a potter trap, but all I seem to catch are squirrels.

I’ve used a tape lure from time to time. The only species I’ve successfully caught in 2019 as a result of the lure are numerous Goldcrests. In the past I did have success with Goldfinch, Blackcap, Chiffchaff and Redwing. I tried the Latvian love song this winter when the Redwings were around, but this year they didn’t seem to be attracted to the song.